“Miracles occur naturally as expressions of love. The real miracle is the love that inspires them. In this sense everything that comes from love is a miracle.” ACIM, T-1.I.3 Get in TouchCircle of Support

The Meaning of Miracles – Healing

David Hoffmeister speaks from the Awakened Mind and, with that Presence and Clarity, guides the mind of the sincere Course student and teacher through one section of the ACIM Text and a lesson for the day followed by a profound commentary. Listen once and you will feel the amazing gift from the Spirit! What a wonderful way to start your day!

“There is no order of difficulty in miracles. One is not “harder” or “bigger” than another. They are all the same. All expressions of love are maximal.” ACIM, T-1.I.1

Using the deep non-dual teachings of A Course in Miracles, this online school for Awakening offers a customized curriculum for profound spiritual immersion.

The Experience of Miracles

WHAT IS A MIRACLE?

“A miracle is a correction. It does not create, nor really change at all. It merely looks on devastation, and reminds the mind that what it sees is false. It undoes error, but does not attempt to go beyond perception, nor exceed the function of forgiveness. Thus it stays within time’s limits. Yet it paves the way for the return of timelessness and love’s awakening, for fear must slip away under the gentle remedy it brings.

A miracle contains the gift of grace, for it is given and received as one. And thus it illustrates the law of truth the world does not obey, because it fails entirely to understand its ways. A miracle inverts perception which was upside down before, and thus it ends the strange distortions that were manifest. Now is perception open to the truth. Now is forgiveness seen as justified.

Forgiveness is the home of miracles. The eyes of Christ deliver them to all they look upon in mercy and in love. Perception stands corrected in His sight, and what was meant to curse has come to bless. Each lily of forgiveness offers all the world the silent miracle of love. And each is laid before the Word of God, upon the universal altar to Creator and creation in the light of perfect purity and endless joy.

The miracle is taken first on faith, because to ask for it implies the mind has been made ready to conceive of what it cannot see and does not understand. Yet faith will bring its witnesses to show that what it rested on is really there. And thus the miracle will justify your faith in it, and show it rested on a world more real than what you saw before; a world redeemed from what you thought was there.

Miracles fall like drops of healing rain from Heaven on a dry and dusty world, where starved and thirsty creatures come to die. Now they have water. Now the world is green. And everywhere the signs of life spring up, to show that what is born can never die, for what has life has immortality.” W-pII.13

AN EXPERIENCE OF HEALING

An LM volunteer shares the experience of Healing Miracles:

“I had an experience with a friend a few days ago that showed me beyond question that this fear is melting. We shared what I could only describe as timelessness. There was (is) no separation, and what joy at laughing fear in the face and having it disappear. The depth of love and connection was beyond words… but hey, will write a few more anyway. LOL

I am reminded of Jesus’ words in A Course in Miracles when he refers to the fear of God (love): ‘Every obstacle that peace must flow across is surmounted in just the same way; the fear that raised it yields to the love beyond and so the fear is gone.’

This is how it feels to me. The love is sorting it all out… and there is nothing I can do about it. I am being undone and the ego has been roaring viciously (it felt so timely to watch clips this morning from the movie, Revolver, where the main character has an awakening experience in an elevator).

I feel such gratitude to have so many mighty companions with me as I go through this undoing. What a blessing to be living in a community where this is the only purpose. There are no worldly distractions here. Everyone has declared that they no longer want what the world offers and are experiencing the gifts available beyond the world of form.”

What Is True Healing?

This Moment Is Your Miracle

We all feel isolated and afraid sometimes, but the truth is, we’re never really alone. As author and spiritual teacher David Hoffmeister points out, it is the deeply ingrained belief that you are separate from everything—that you’re on your own and there is reason to be afraid—that prevents you from living the joyful life you long for. How can you begin to untangle the thoughts and feelings that keep you trapped in your own egoic fears?

This Moment Is Your Miracle addresses this painful yet widespread belief in separation, peeling back the layers of misperception to uncover the divine oneness at the heart of reality. With this book as your guide, you’ll learn how to trust your inner guidance and accept life’s miracles for healing your mind. There has never been a better time than this moment! Click here for more details. 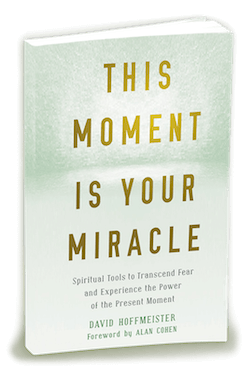 All Healing Is in and of the Mind

“All healing is in and of the mind. It is helpful to be reminded that you were looking through a darkened glass at the world when you perceived sickness or any form of error. The message of the Atonement is that the past is over and gone and, in fact, never happened. Symptom removal is but a reflection of a shift in perception. When the mind is wholly aligned with the Holy Spirit’s Perspective there is no perception of separate persons, places, things, events, or situations. Linear, situational thinking was the problem that the Holy Spirit has already Corrected. The only task for a sleeping mind is to accept this Correction; that is your goal now. Time and Eternity cannot co-exist.

You are ready to open to your Heavenly function. Christ does not ask for a spiritual resume, yet your willingness will carry you farther along than you can imagine. It cannot be difficult to do all that Christ has appointed for you, for it is Christ Who will do it through you until the realization dawns that You are the One. If you knew Who walks beside you along the way, fear would be impossible. I am always with you and you can always Call on the ‘I Am’ Presence to join you in whatever circumstance you seem to be facing. My heart goes out to You Beloved One, for You are my Self. Our joining carries the power of All of Heaven! Trust in That and watch the fears of the ego melt away and disappear forever.”

–David Hoffmeister, Unwind Your Mind Back to God: Experiencing A Course in Miracles

QUANTUM FORGIVENESS for the Awakening Mind:

The practical implications of Quantum Forgiveness are immense! Using seven modern-day movies as teaching examples and the teachings of A Course in Miracles (ACIM), David Hoffmeister guides us through time and space to a Holy Instant that ends pain and suffering. If we open to what this book has to share and apply it in our daily life, we need never again fear to be wrong, strive to create a better life, or compromise ourselves by trying to adapt to a false idea of who we are or what the world is. Instead, we will relinquish expectations and come into a limitless sense of pure potential without concern or criticism. Clueless and cared for, we will experience the true nature of Reality and flow through our world as a happy dreamer—relieved of false responsibility, yet still truly helpful! 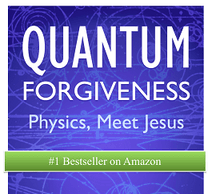